There are a total of 22 users online now:

Visit the forums for the details or to leave a comment. 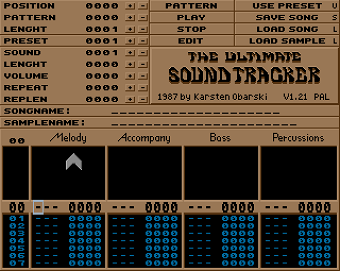 MOD is a computer file format used primarily to represent music, and was the first module file format. MOD files use the “.MOD” file extension, except on the Amiga which doesn't rely on filename extensions, instead it reads a file's header to determine filetype. A MOD file contains a set of instruments in the form of samples, a number of patterns indicating how and when the samples are to be played, and a list of what patterns to play in what order.

The first version of the format was created by Karsten Obarski for use in the Ultimate Soundtracker; tracker software released for the Amiga computer in 1987. The format has since been supported by hundreds of playback programs and dozens of other trackers.

The original version of the MOD format featured four channels of simultaneous audio playback, corresponding to the capabilities of the original Amiga chipset, and up to 15 instruments.

Later variations of the format have extended this to up to 32 channels and 31 instruments.

The format was designed to be directly playable on the Amiga without additional processing: for example, samples are stored in 8-bit PCM format ready to be played on the Amiga DACs, and pattern data is not packed. Playback required very little CPU time on an Amiga, and many games used MOD files for their background music.

After the Amiga's production ceased, the MOD format has had continued popularity in the Demoscene and as background music for independent video games and Chiptunes. It is not uncommon to hear MOD music in keygens either.